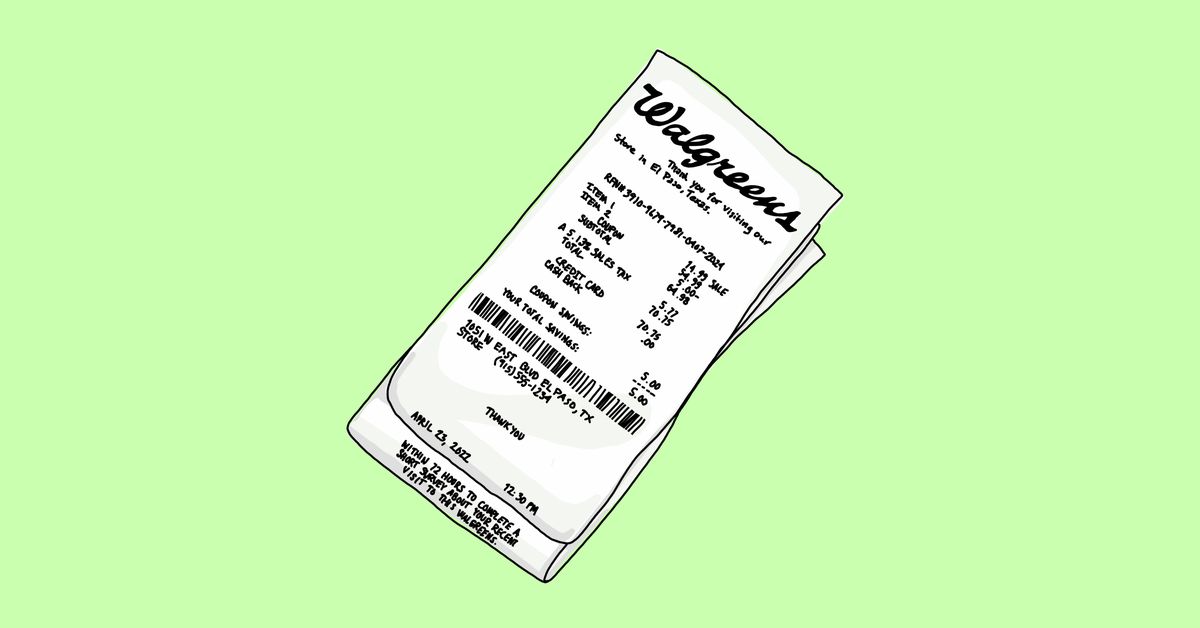 It all started in April 2021 with children’s cherry cough syrup, a baby humidifier and a 32-ounce box of Aunt Jemima’s pancake and waffle mix. It was the first receipt to arrive in my inbox from Walgreens store #3924 in El Paso, TX. Total: $67.89 on a Visa debit card with 63 cents earned in Walgreens rewards.

The thing is, the receipt wasn’t mine; I live 2,000 miles away in New York. Whoever signed up for the Walgreens loyalty program in El Paso registered my email address and in the process set up my Gmail for a wacky collision with the US drugstore business. And ever since that fateful day, every time they buy something at Walgreens, I get an auto-generated receipt that tells me all about it.

Under more normal circumstances, this would be a mundane modern annoyance, a very specific and just itch that can only be scratched by hitting unsubscribe and never leaving comments. But during the isolated, pre-vax days of the pandemic, when social circles shrank and political spheres drifted further apart, these glimpses of life beyond the two square miles around me were strangely invigorating. Over the next few months, I got an undeserved glimpse into a consumer life that fascinated me and made me feel connected to a stranger in many, many brightly lit aisles. Both unexpectedly and improbably, these digital scraps would teach me how people cope in an age of unparalleled physical and social separation.

Luckily for everyone, what would ultimately keep this bit of digital voyeurism from veering even further into creepiness was the reality that Walgreens receipts offered no identifying data about the shopper. Other than the location of the store, the items purchased, and the method of payment, there would be no (legal) way to know who that shopper really was.

And, it turns out, it’s pretty hard to identify a Walgreens customer anyway. According to analytics firm Numerator, about two-thirds (!) of US shoppers frequent the drugstore chain. Its typical buyer is a suburban white baby boomer who earns $80,000 a year, comes by about once every three weeks, and spends about $22 per trip. My mystery shopper, however, lived in a mid-sized city and returned the next afternoon, triggering another email.

This time around, the shopping diary included 16-ounce clear plastic cup sleeves (70 for $7), 90 paper plates for $4, a refill of six Dollar Shave Club disposable razors, and a bar of something called Duke Cannon Big American Bourbon Soap, which claims to be made with Buffalo Trace bourbon. With the baby sniffly apparently still of concern, a RaZbaby-branded RaZberry silicone teether and Zarbee’s Naturals Baby Gum massage gel were also purchased. Total: $47.54 on Visa debit card, 44 cents earned in Walgreens cash rewards. A mental image of my buyer began to sharpen.

Whatever socialized self-consciousness there may be about buying toilet paper in public disintegrates like cut-price thickness.

The best and most surreal thing about drugstore shopping is that basically anything goes. Whatever socialized self-consciousness there may be about buying toilet paper in public disintegrates like a cut-price fold. Judgment on someone else’s onion pads or banana peanuts is (usually) reserved. Buying Reese’s Minis at a 35% markup just to get another half price is the kind of bad deal you get when you’re at a chain drug store. There’s something about all the shelves: they’re so irreducibly filled with reminders of our obligations, our infirmities and our mortality, that they compel us to shop with our credentials.

And so, when my mystery shopper went to the Walgreens counter at 2:57 p.m. on a Thursday to drop $69.73 on a 24-ounce tallboy from Modelo, two more bars of Duke Cannon soap (this time infused with beer Old Milwaukee), two bottles of Stella Rose blackberry flavored wine, a pack of Camel Menthols, and a full pound of Oscar Mayer bologna in two 8-ounce packages, I knew we had entered a new dimension. A higher truth about life.

It was late April, 12 days after that first email. More than half of American adults had received their first Covid-19 vaccines and cases had dropped significantly in more than half of the states. In my home in New York, the outlines of dinner invitations and travel plans were sketched nervously but optimistically.

An intoxicating combination of alcohol and bologna

I’ll never know what prompted the last El Paso customer frenzy, but it definitely seemed celebratory. More than that, it was normal. Of course, I wondered if never having bought a pound of bologna for $4 at Walgreens put me inside or outside the American mainstream, but this latest receipt proved that life normal was still in progress. I didn’t even have to smell the strange scented Mother’s Day candles in the store or hear the Vanessa Carlton singing above my head to feel that things were finally leveling off.

This intoxicating combination of alcohol and bologna also spoke of American resilience for historical reasons. A hundred years before, in the wake of another pandemic, Walgreens had embarked on a massive national expansion during Prohibition by selling alcohol – usually whiskey – medically prescribed for a litany of often dubious ailments. This (legal) gamble transformed Walgreens from a regional store with a few dozen outposts in the mid-1920s to a national chain of hundreds in 30 states by 1934.

By then, Oscar Mayer had already been a staple of charcuterie-centric goodwill for decades, having shunned the unsanitary practices of other meat purveyors infamously described in muckraking tomes like The jungle. If Walgreens and Oscar Mayer could thrive through tough years by being vigilant, maybe we could too.

Outside of my messaging tabs, a giddy energy had begun to set in

It was almost May. Outside of my messaging tabs, a giddy energy had begun to set in. The vax hot summer was surely approaching, threatening to unleash a tide of suppressed excitement and good humor. Sixty-four percent of the country expressed optimism about the year ahead. By the end of the month, more than half a million new jobs would be registered by the Labor Department.

Yet even the spectrum of normality has its limits. After their late-April binge, I didn’t hear from my novelty soap obsession for more than three weeks — about the statistical cadence for a normal Walgreens shopper. By the third week of May, they had moved to a newer store (#9173) about three miles west, next to a Jack in the Box and across from a competing CVS.

They also made less splashy purchases – items devoid of joy or sickness. A gallon of whole milk, two 20-ounce Red Bulls, and another pack of camels. With only eight cents in Walgreens cash rewards earned, they weren’t going to win a free pack of Hi-Chew anytime soon.

Zooming out, it seemed fair to wonder if there would be a cost to getting back to regular routines. Would we let go of our new habits and give up the perspective we have gained? Would we lose a dangerous status quo just to fall back into a dysfunctional status quo? Well-timed, after that modest Walgreens run on the third Saturday in May, the El Paso shopper went totally black.

A general irony of the pandemic is that, as consumers, many of us are drifting towards health as much as we are drifting towards comfort. A study of the Consumer Research Journal summed it up as a divide between Big Macs and kale salads, both of which have grown in popularity over the past couple of years. The dramatic loss of control with the pandemic means we seek out the familiar while fending off death and disease with healthier practices. These impulses might as well explain why, as the delta variant descended, millions eventually quit jobs they didn’t like, didn’t adequately protect them, or just seemed foolish in the context of everything else.

I confess that not hearing from the El Paso buyer during the fizziness of our collective summer of redemption made me worry for them. It was heartening to see that, even as news from everywhere else faded, El Paso had managed to avoid the worst of the delta surge. Like a Big Mac or a BOGO bag from Goldfish, the silver linings were a temporary break from the hovering terror.

Finally, in October, the El Paso buyer (inadvertently) dropped a line on me. After shopping exclusively in northwest El Paso, they had moved to a Walgreens outpost east of town. At around 10 p.m. on a Monday, they had picked up a pack of Peanut M&Ms, two boxes of Raisinets, a box of Milk Duds, a Snickers bar, a theater-sized box of Reese’s Pieces and four packets of Welch’s Berries’ n Cherry snacks. This time they paid the $7.50 in cash.

The following Tuesday night they returned for two packets of Peanut M&Ms, an Almond Joy and more Raisinets and Milk Duds. From a distance, I imagined that an irresistible coupon had been the culprit in keeping them coming back. Still, I was happy to know that our Walgreens membership saved us 51 cents.

In another significant development, I noticed that Walgreens also redesigned its email format from the ones I received in the spring. Receipts were now warmer and less spartan, dotted with colorful icons that looked a bit like emojis: a shopping bag, a blue megaphone announcing member savings, and a banner above a barcode to emphasize the ease of making a return. The footer of the email also contained a link to unsubscribe from digital receipts. I would never click on it.

Adam Chandler is a journalist and author living in New York.

Honey trap: is there a downside to the beekeeping boom? | The bees